The Welsh Liberal Democrats are leading the debate in Wales on human rights, by calling on the National Assembly to unite against plans by the Tory UK Government to repeal the Human Rights Act.

This follows on from the protest held in London to protect the Human Rights Act, which saw a huge Lib Dem turn out.

Click here to join our campaign to stop the Tories abolishing the Human Rights Act. 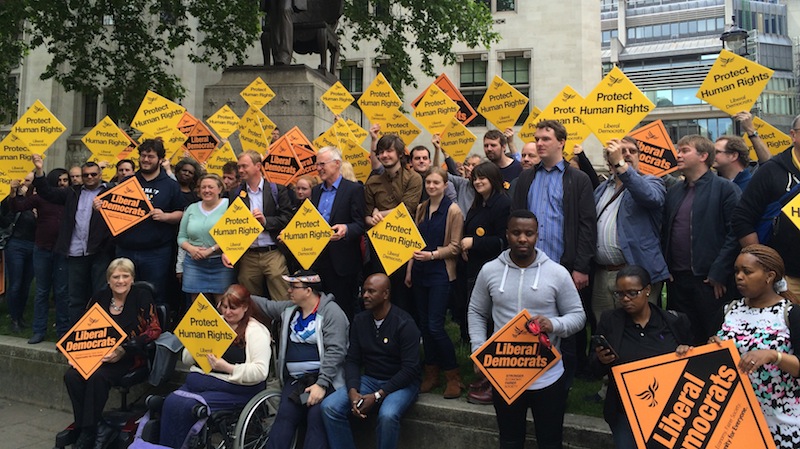 "These human rights laws protect the most vulnerable in society: they have stopped the state spying on us, helped victims of rape or domestic abuse, supported peaceful protest, protected soldiers, guarded against slavery and provided answers for grieving families.

"Scrapping the Human Rights Act would undermine our Welsh devolution settlement and be a retrograde step in the promotion and protection of human rights. It would only make the system more complex with one set of laws applying to devolved issues and another to non-devolved issues. Far from breaking the link with the ECHR, scrapping the Human Rights Act would make it harder to pursue cases domestically and would force people to use the Strasbourg route instead.

"There is certainly a debate to be had about how we can improve the ECHR and promote a deeper understanding of human rights. However this must be framed within sensible debate and not nationalistic furore spearheaded by right-wing politicians for short term political gain.

“The Liberal Democrats blocked David Cameron from scrapping the Human Rights Act in Government and we must stop him again now. That is why we are leading this debate today, calling on the National Assembly to unite to stop the Conservatives riding roughshod over our hard-won rights.”