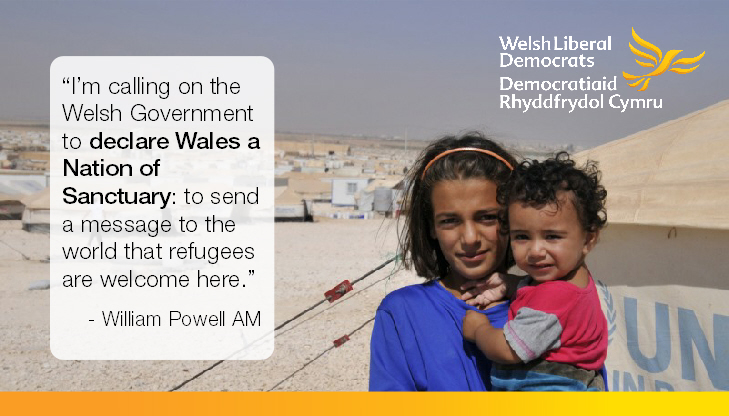 The Welsh Liberal Democrats will today call on the Welsh Government to declare Wales a ‘Nation of Sanctuary’ and do what it can to welcome refugees displaced by conflict in the Middle East and across the world.

Welsh Lib Dem Assembly Member William Powell will today lead a debate in the Assembly on Wales becoming a Nation of Sanctuary, with specific calls on the Welsh Government to ensure refugees are welcome by:

Funding advice, advocacy and support services for refugeesEnsuring that the outcomes of resettlement schemes are consistently monitored, so that effective systems can be establishedUsing devolved powers over equalities, housing and social care to ensure that all people living in Wales, including asylum seekers and refugees, are treated with equal respect and care across the countryPromoting the participation and inclusion of asylum seekers and refugees in local communities

“The response by Conservative Ministers in Westminster to the Syrian refugee crisis has been truly shocking. Not only have they refused to take in those who are most in need, they are still resisting calls by Lib Dem Leader Tim Farron to take in thousands of orphaned children with nowhere else to go.

“Wales has a golden opportunity to take a different attitude; to recognise that these people are vulnerable and need our support, and to do all that we can to help them. That’s why I’m calling on the Welsh Government to declare Wales a Nation of Sanctuary: to send a message to the world that refugees are welcome here.

“Although the Welsh Government has limited powers over who’s allowed into this country, there is so much more that could be done to make those refugees who are being resettled here feel much more welcome. It’s these actions that I hope Ministers will take today.”