We must fight for LGBT equality everywhere

Ahead of a Senedd statement this afternoon on International Day against Homophobia, Biphobia and Transphobia, the Welsh Liberal Democrats have urged Wales to build on recent progress in LGBT rights and fight for safety, equality and freedom for LGBT people across the globe. 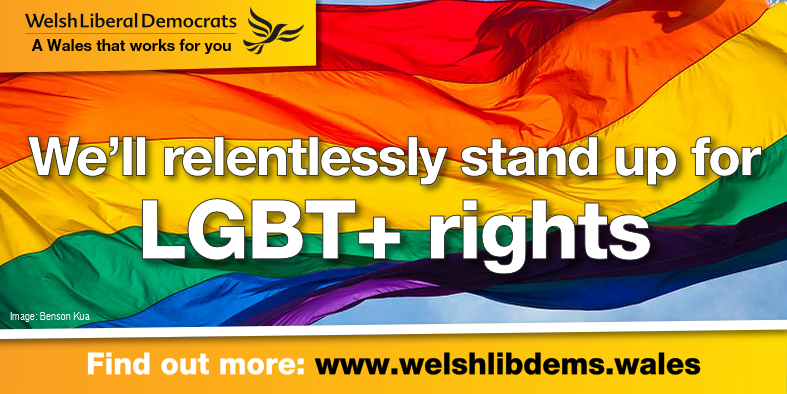 Rainbow by Benson Kua is licensed under CC BY-SA 2.0

There is no doubt that the past few years have seen great strides in LGBT rights in the UK and across the world, but there is far more that needs to be done to create a world where every LGBT person can live safely, equally and freely.

Despite progress in recent decades, LGB people in the UK are still marginalised and oppressed, while Trans people continue to face unprecedented barriers to living freely without fear of discrimination, intolerance or violence.

In recent months the trans community has faced a barrage of transphobia from numerous mainstream media outlets, denigrating their identities and dismissing their rights. This isn't just unacceptable, it's dangerous when 45% of trans school pupils in the UK report attempting suicide.

Globally, the situation is no better. A report by the International Lesbian, Gay, Bisexual, Trans and Intersex Association (ILGA) last year showed that 72 countries continue to criminalise same-sex relationships, including 53 Commonwealth countries. What's more, more than 2,500 transgender people across 71 countries were killed between January 2008 and September 2017.

We cannot rest until LGBT people across the globe are able to live freely, without fear of discrimination, marginalisation or criminalisation.

As committed internationalists, the Welsh Liberal Democrats will continue to fight for LGBT rights in every corner of the globe. We are the party of human rights and make no mistake, LGBT rights are human rights. We will not rest until we create a fair and tolerant world where everyone has the opportunity to be themselves and live their lives to the fullest.