Mark Williams MP responds to the triggering of Article 50 and outlines the Welsh Liberal Democrats negotiating priorities for Wales.

“Theresa May is about to embark on an extreme and divisive Brexit.

“If the Tories want to show that they are listening to the concerns of Wales, they will keep Wales and the UK in the Single Market. Otherwise, May’s visits to Wales were nothing but show.“Membership of the Single Market is vital for our economy, our industries, and for the jobs of millions of people. Leaving the Single Market was not on the ballot paper in the referendum, it is a political choice made by Theresa May.“You can’t have a hard Brexit and strong economy and the Liberal Democrats are demanding that it should be the people who have the last say on the final Brexit deal.”

Key issues for negotiation for the Lib Dems

1. Protection of rights for EU citizens and UK citizens

Those who have made Wales and the United Kingdom their home should be allowed to stay. We will seek to secure the same for UK citizens living in European Union countries.

2. Freedom of Movement and the Single Market

Any deal negotiated for the United Kingdom outside the European Union must include membership of the Single Market and protect freedom of movement.

3. Protection of Erasmus, investment in our universities and research networks

We should do everything we can to protect Erasmus, as well as other EU funded schemes increasing opportunities for young people. We will campaign to sustain the levels of investment in UK universities and their associated research networks.

Farming is one of Wales' great industries, and we will campaign to ensure that the deal protects Wales' farmers and our farming industry, from the financial support farmers receive to Wales' huge exports to the EU. 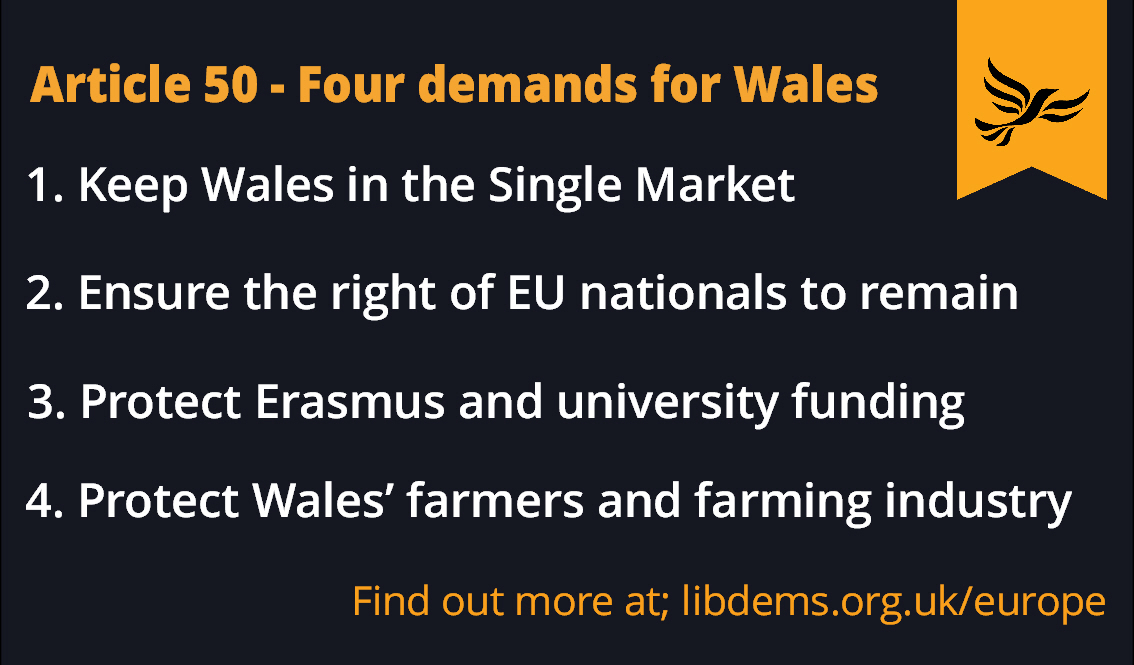