Welsh Lib Dem MP Jenny Willott has welcomed today’s announcement that the National Minimum Wage for apprentices will increase by 20% going up by 57p an hour, from £2.73 to £3.30 this October.

This is the largest ever increase in the National Minimum Wage for apprentices.

Deputy Prime Minister Nick Clegg has also announced that the adult National Minimum Wage will increase by three per cent to a new rate of £6.70 this October.

This is the largest real-terms increase in the National Minimum Wage since 2008 and is set to benefit more than 1.4m of Britain's lowest paid workers.

The increase in the apprentice National Minimum Wage will halve the gap with the rate for 16 to 17 year olds, which will increase by two per cent, from £3.79 to £3.87 per hour. 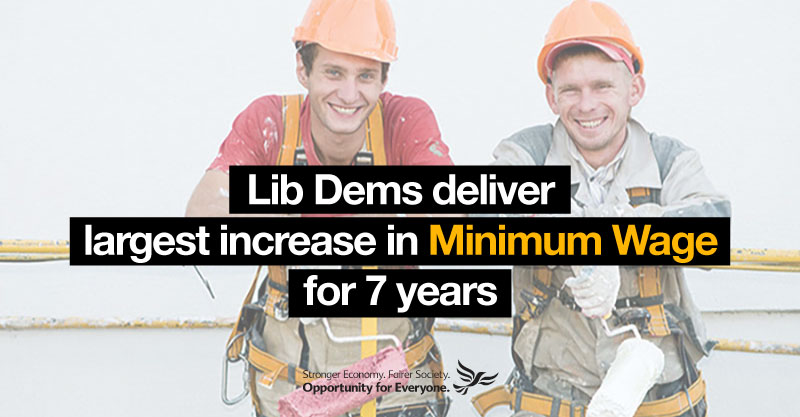 “It’s been no secret that Vince Cable and Liberal Democrat Ministers have been pushing hard for an increase in the Minimum Wage. I’m therefore pleased we have managed to secure this increase.

“I’m particularly delighted to see the 20% rise in the minimum wage for apprentices. The Liberal Democrats have overseen a huge increase in apprenticeships, which are helping to create a stronger economy and opportunities for young people. This announcement will widen access so that more young people will be able to become an apprentice and benefit from the opportunities they offer.

“This announcement will benefit around 73,000 people in Wales, including around 8,600 people in Cardiff. This, alongside the fact that Liberal Democrats have cut taxes by over £800 for low and middle come earners, means we are helping people with their cost of living.”

“This is just one of the many ways in which we’ve created a fairer society whilst building a stronger economy.

"If you work hard, this government is behind you all the way. Whether you’re on low pay or starting your dream career through an apprenticeship, you will get more support to help you go further and faster."