The Welsh Liberal Democrats have today called on the Welsh Labour Government to outline plans to end what it describes as Cardiff Airports blackhole on taxpayers’ money. 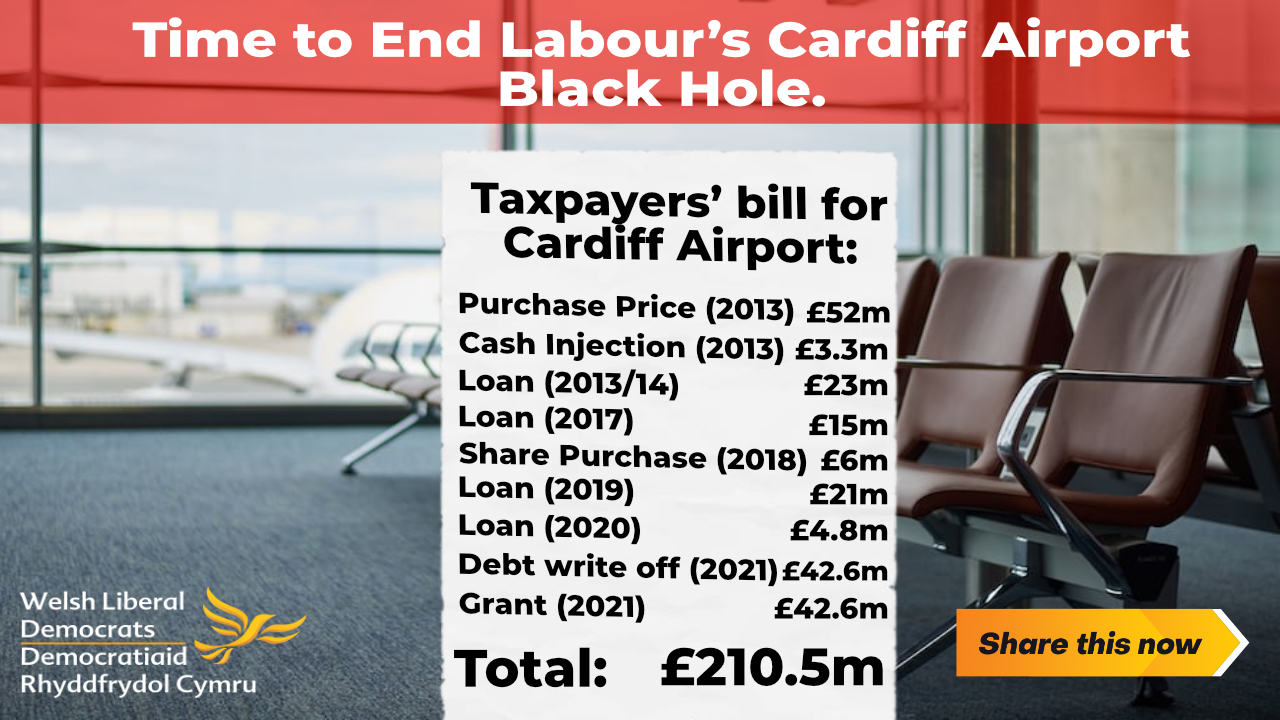 Figures released by the Welsh Government today show that passenger numbers at the airport continued to decline in 2021 from 2022 despite less travel restriction being in place. According to the data released, passenger numbers declined by 44 per cent in 2021 to 123,000.

The Welsh Government bought Cardiff Airport in 2013, despite former Assembly Member Eluned Parrott and the Welsh Liberal Democrats warning of the massive risk the purchase posed to Welsh taxpayers.

Since then, passenger numbers have never met the Welsh Government’s own targets and the airport was valued as just £15 million despite being purchased for £52 million in 2013.

Overall, over £210 million of Welsh taxpayers’ money has now been spent on the airport with various Government loans, cash injections and debt forgiveness being introduced. The airport’s high expenditure has caused the Welsh Liberal Democrats to label the project Welsh Labour’s biggest white elephant. The party also argues that the Welsh Government owning and subsidising an airport is incompatible with its climate goals.

“We urgently need the Labour Government to outline their plans for ending this blackhole that has already wasted far too much of taxpayer’s money.

“Almost ten years on from the purchase the Welsh Liberal Democrats warned against we have been more than vindicated. The airport continues to make massive losses and is now worth only a fraction of its purchase price.

“Imagine what £210 million in taxpayers’ money could have done for public transport across Wales had it not been squandered on this project?

“It is also worth mentioning that the Welsh Government owning and subsidising an airport, alongside subsidising domestic flights, is not compatible with its climate goals.

“We are clear that the airport should eventually be returned to the private sector. While the airport does remain under Government ownership, they need to prioritise securing new routes, especially to more short-haul EU destinations, in addition to securing long-haul routes which currently don’t exist after Qatar Airways exit from the airport.

“We also need to see better marketing and public transport access to the airport put in place.

“We have had 10 years of what must be Welsh Labour’s biggest white elephant, it is long past time we demand better from the Welsh Government on this issue.”